1. Alexanderplatz
Alexanderplatz, also called „Alex“ by the Berliners, was not only the centre of the former Eastberlin, but from an architectural point of view it was supposed to present the centre of the GDR. Surrounded by high-rise buildings, it is also the place with the highest building in Germany: the 368m high TV tower. There is one floor with panorama windows and a café in the top. The Red City Hall, the seat of the Berlin head mayor, and the oldest churches in town, the medieval St. Nicholas’ church from 1230 and St. Mary’s from 1294 are very near to the square.

2. Berlin Cathedral
Berlin Cathedral is a protestant church on the so-called museum island. The cathedral was built in the style of the Italian High Renaissance and Baroque and belongs to the most important churches in Germany.

3. Unter den Linden
Berlin’s most splendid and elegant boulevard and promenade for strolling. Nowadays, the mall is lined by the main building of the Humboldt University of Berlin, the German Historical Museum, the Berlin Cathedral and the State Opera House, and it also takes you to the Berlin Museum Island with the most important exhibitions in the country.

4. Brandenburg Gate
There is no doubt that it is the town’s landmark. Built in 1788 by Carl Gotthard Langhans, it was just one of many city gates around Berlin. In front of the gate there is Pariser Platz, where there are many important buildings, such as the history-charged Hotel Adlon and the embassies of the UK and the USA.

5. Reichstag
When the Federal government moved to Berlin, the Reichstag building from 1894 which lies directly by the border strip and had fallen into a deep sleep, was revived. From the new dome made of glass you can have a wonderful view of the going-ons of the city. Around the Reichstag building a lot of government buildings have been erected, among others the Federal Chancellery. In the very neighbourhood the new Central Station was opened in 2006.

6. Victory Column
Up to 1938, the victory column that was built in 1871, stood directly in front of the Reichstag building, but for representative reasons the Nazis relocated it to its present place in Großer Stern. This symbol of victory is crowned with the Roman goddess of victory on its top.

7. Checkpoint Charlie
Checkpoint Charlie used to be the best-known border crossing checkpoint through the Berlin wall between 1961 and 1990, and it was the scene for spectacular escapes from the former Eastberlin. It connected the Soviet sector with the American sector in Friedrichstrasse. This checkpoint was one of three allied checkpoints used by the Americans, and was named according to the third letter of the international phonetic alphabet (Alpha, Bravo, Charlie, …).

8. The Jewish Museum
The Jewish Museum presents its visitors two millennia of German-Jewish history. The zigzag-shaped building was designed by the American architect Daniel Libeskind, and it is supposed to remind of a shattered Magen David.

9. Gendarmenmarkt
Gendarmenmarkt developed in the end of the 17 century, and it is often called “Berlin’s most beautiful square”. The Concert Hall is the central building, which is flanked by the French Cathedral on its northern edge and the German Cathedral opposite.

10. Potsdamer Platz
Potsdamer Platz in Berlin’s Mitte District and Tiergarten is one of the busiest squares in Europe and a popular meeting point of Berlin’s political, social and cultural scene.

11. Kurfürstendamm
Around the zoo there is not only the former centre of Westberlin, there is also Berlin’s still most important shopping mall. In the past, the bridle path of the Elector to his hunting lodge, and nowadays Berlin’s most expensive address has become a home to the most elegant brands. At the extension of Ku’damm there is also the KaDeWe, Germany’s biggest and most luxurious retail heaven – and, not to forget, the zoological gardens.

12. Charlottenburg Castle
The pompous Charlottenburg castle lies a bit outside the centre. It was built around 1700 by the Prussian head of state Friedrich III. for his beloved wife Sophie-Charlotte, who was adored by the people, and it is situated in the middle of a picturesque castle park directly by the river Spree. 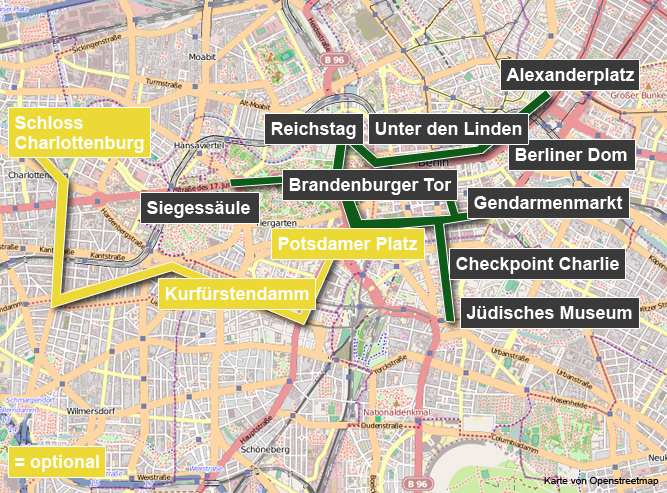