The tour takes you via Wustrow and the artists' colony Ahrenshoop to Zingst. Upon request group tours for up to 11 persons can be arranged. All vehicles are equipped with air-conditioning. 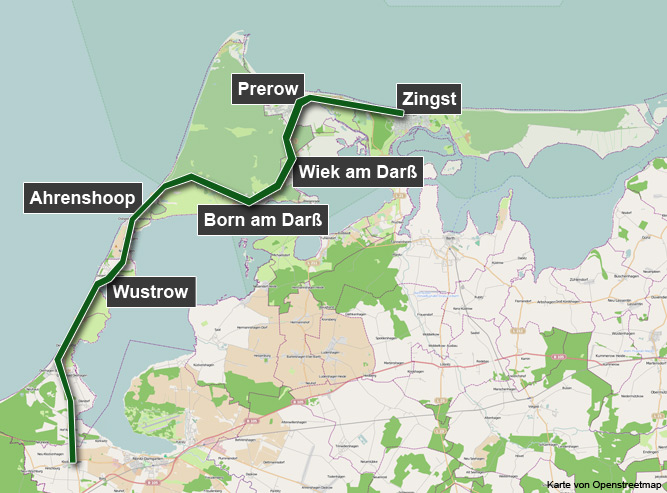 The seaside resort of Wustrow used to be a fishermen's and seafarers' village in Mecklenburg-Vorpommern, directly by the Baltic Sea. Nowadays it is mainly characterized by tourists and holiday makers. Wustrow is situated on Fischland between the Baltic Sea and the so-called Saaler Bodden, a shallow bay.
The name Wustrow derives from the Slavic language and means "engulfed place" or "place on the island".
From the high steeple of the church, which was built between 1870 and 1873, you can enjoy a wonderful 360 degree view. The high steeple also used to be important as a navigation mark. The open tower gallery was supposed to give seafaring students the opportunity to practice navigating.
Besides the long beach, in Wustrow there is a harbour in Saaler Bodden. It is especially popular for the zeesen boats (named after sean nets), former fishing boats with distinctive brown sails.

The seaside resort of Ahrenshoop in the region Fischland in Mecklenburg bay is situated on the link from the peninsula Darss to the mainland.
The village, where it is now, was founded by seafarers in 1760. In the end of the 19th century artist painters came to settle down here. The development of the Ahrenshoop artists' colony was the basis for the present artists' village Ahrenshoop with its special flair.

The seaside resort Prerow is surrounded by the National Park "Vorpommersche Boddenlandschaft". West of Prerow there is Darsser Ort with an old lighthouse and the nature exhibition "Natureum". The fishermen's and seafarers' village Prerow was first mentioned in the 12th century.
Later the seaside resort Prerow was viewed as the Mallorca of the GDR. In summer there were 20 times as many holiday makers as there were inhabitants. At times, only the camping site, nowadays the Rainbow Camp of Prerow, accommodated 10,000 guests. Tourism stills plays an important role in Prerow. Directly by the village there is the five km long and up to 80 m wide sandy beach with a slightly sloping waterside. It is also the place of Germany's biggest nudist beach.
West of Prerow there is the rough Darsswald with the western beach, which is not overcrowded with tourists. Prerow has a harbour for pleasure crafts on Prerower Strom with access to Saaler Bodden. From this harbour, protected from the open sea on the eastern edge of town, there are regular boat tours of the Bodden. Launches to the cranes' roosting places between Zingst and the island of Bock are also arranged during the season.
The seafarers' church, which was built in 1728, has a brick-stone nave bay and a wooden steeple. Here you will find a number of model ships ("votive boats"), most of which were donated by rescued ship's crews. In the adjoining cemetery there are still old captains' graves from around 1800.
The 360 m long pier was rebuilt in 1993. Similarly to the Darss villages Born and Wieck, Prerow is characterized by a lot of old thatched captains' houses. Many of them are distinctive for their colourfully painted entrance doors with motives, which were often made during long sea voyages.

The spa Zingst is the eastern-most village of the charming chain of the peninsulas Fischland-Darss-Zingst, and it is embedded between the Baltic Sea and the Bodden, in the middle of the Nationalpark "Vorpommersche Boddenlandschaft".
Zingst is an attractive holiday resort full of traditional charme with a modern and enchanting atmosphere. You will discover endless sandy beaches, and a unique, almost unspoilt landscape whose well-developed cycle and walking paths invite you for extended scouting expeditions. The pleasant clean sea air, the healing power of the crystal clear seawater and the mild bracing climate make Zingst the perfect place for versatile cure, wellness and health offers.
But Zingst is also a nature paradise of a special kind. In spring, and especially in autumn, it is the roosting place for thousands of cranes and changes the national park "Vorpommersche Boddenlandschaft" into a real "land of cranes" with a breath-taking, phantastic natural spectacle, which you can even watch from the village of Zingst.